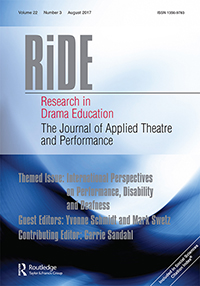 This article proposes a new conceptual approach to disability and performance through a contribution that comes entirely from outside the disciplines; a re-theorisation of Gibson’s [1979. The Ecological Approach to Visual Perception. Hillsdale: Lawrence Erlbaum Associates] theory of affordances. Drawing on three visual ethnographies with differently disabled individuals, and building upon my previous consideration of performance as ‘affordance creation’ in itself [Dokumaci, A. 2013. “On Falling Ill.” Performance Research 18 (4): 107–115], the article conceptualises affordances as a form of micro-activism – one that can allow us to unpack the entanglements of disability, performance, and matter. Putting Gibson’s theory in conversation with Canguilhem’s philosophy of life, it proposes the concept ‘vital affordances’ as a new way to think through this micro-activism, and the way disabled individuals might transform the world and its very materiality through the most mundane of their performances.