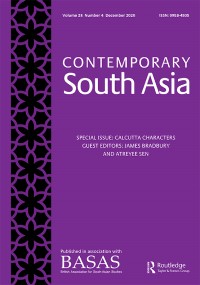 The special issue is an experiment in alternative ethnographic depictions of Calcutta (in Bengali named Kolkata) and South Asian cities more generically. It explores the possibilities of representing urban life through the stories of fourteen diverse ‘characters’, each with their own accounts of living in the East Indian cultural and commercial hub.

As the editors of the issue, James Bradbury and Atreyee Sen, write in their common introduction:

“Calcutta characters and their ethnographers coexist in a dialogue, which flows in several directions – building up a rich and multi-layered evocation of the city through its many fragments. Their stories are snapshots of the city, in the moments at which the ethnographers and their interlocutors cross paths.”

The editors stress that the issue does not try to describe every kind of person that one expects to meet in the city, but provides a focus on specific individuals who have assumed importance for the writers in the course of their research. It is also not a priority to develop analytical contributions to the city or the person as categories. “Resisting the predictable format of scholarly articles, this issue foregrounds voices, writing and people,” as they write.

Besides editing the special issue, Atreyee Sen has also contributed with the article ‘Prahlad and Shanta: the city’s madness’, co-written with Malini Sur, an anthropologist from Western Sydney University.

The article explores the irreverent and supposedly irrational actions of two protagonists, Prahlad and Shanta, characters that the authors encountered during the course of their extended fieldwork in Kolkata.

Prahlad is an Oriya migrant plumber who passionately seeks god at the cost of making money. Shanta is a grieving mother who relentlessly seeks justice for her son’s disappearance during a revolutionary movement that consumed the majority of urban youth in the 1970s. The characters have non-normative obsessions with God and justice, which mark them out as ‘mad’ inhabitants of a modern city.