No Place for Grief - Martyrs, Prisoners, and Mourning in Contemporary Palestine 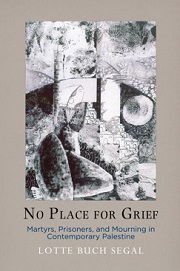 Westerners 'know' Palestine through images of war and people in immediate distress. Yet this focus has as its consequence that other, less spectacular stories of daily distress are rarely told. Those seldom noticed are the women behind the men who engage in armed resistance against the military occupation: wives of the Palestinian prisoners in Israeli detention and the widows of the martyrs. In Palestine, being related to a detainee serving a sentence for participation in the resistance activities against Israel is a source of pride. Consequently, the wives of detainees are expected to sustain these relationships through steadfast endurance, no matter the effects upon the marriage or family. Often people, media, and academic studies address the dramatic violence and direct affliction of the Palestinians. Lotte Buch Segal takes a different approach, and offers a glimpse of the lives, and the contradictory emotions, of the families of both detainees and martyrs through an in-depth ethnographic investigation.

No Place for Grief asks us to think about what it means to grieve when that which is grieved does not lend itself to a language of loss and mourning. What does it mean to "endure" when ordinary life is engulfed by the emotional labor required to withstand the pressures placed on Palestinian families by sustained imprisonment and bereavement? Despite an elaborate repertoire of narrative styles, laments, poetry, and performance of bodily gestures through which mourning can be articulated, including the mourning tied to a political cause, Buch Segal contends that these forms of expression are inadequate to the sorrow endured by detainees' wives. No Place for Grief reveals a new language that describes the entanglement of absence and intimacy, endurance and everyday life, and advances an understanding of loss, mourning, and grief in contemporary Palestine.

"No Place for Grief is simply breathtaking. This harrowing ethnography of lives barred from hope and yet seeking an ordinary existence in occupied Palestine is permeated by political urgency and a captivating poetic hesitancy. Lotte Buch Segal's intense listening and probing analysis brings these characters and their demolished households out of obscurity, letting them shatter and recast our understanding of political violence, chronic suffering, and human endurance in the twenty-first century."— João Biehl, author of Vita: Life in a Zone of Social Abandonment "Imaginatively conceived and written with great compassion and grace, No Place for Grief makes a rich contribution to our understanding of social suffering and the folding of violence into everyday life."—Veena Das, Johns Hopkins University

"Lotte Buch Segal's No Place for Grief is not just another addition to stories of suffering and trauma among the Palestinians—rather, it shows how the relation between gender and violence is paramount to the way in which political violence might be understood in long, drawn-out conditions of war and occupation. As such, No Place for Grief is relevant not only to psychologists and anthropologists, but also to global and public health readers who seek to understand what life is like in a context of protracted and ongoing exposure to political violence."—Rita Giacaman, Birzeit University, Palestine