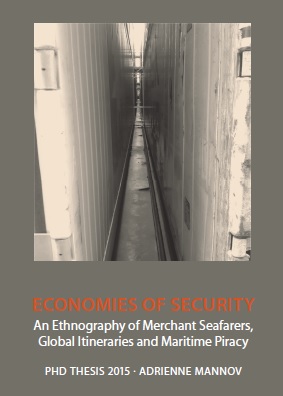 In the summer of 2011, newspaper headlines trumpeted stories about maritime piracy attacks off the coast of Somalia in sensational and terrifying terms. But how did seafarers on board perceive this risk? In order to answer this question, and in collaboration with Seahealth Denmark, I carried out 16 months of anthropological research on board merchant ships and on land among seafarers and industry stakeholders in Denmark, the Ukraine, India and the Philippines. These are some of the major players in terms of crewing and international shipping. Piracy is, however, not the only existential risk that seafarers face, but rather a series of risks that threaten their and their loved ones’ lives and livelihoods. The dissertation offers an analysis of international seafarers’ economies of security in which their unequal positions within the global maritime supply chain is in focus.

“International merchant seafarers” is a specific category of laborers that serve the contemporary international shipping industry. They work on the cargo ships that move commodities along itineraries between, for example, Asia and Europe, the United States and West Africa, or Europe and South America on container ships, bulk carriers, tankers and other types of long haul vessels. Cargo ships fly many different flags, are owned by a variety of citizens, and each ship is most often crewed by a vastly diverse group of nationals. Of the crews that I sailed among during fieldwork, nine nationalities were present. It is standard to find many different nationalities among crews that operate international cargo ships. Seafarers who work on ships that trade internationally work and live on board for approx. 2-10 months or more at a time, sometimes for the better part of their adult lives. They operate an international fleet of merchant ships, which literally moves the global economy. In 2008, merchant seafarers moved 8.2 billion tons of goods in total . Today, 90% of all goods bought and sold globally are transported on board merchant ships. It is estimated that there are a total of 1.3 million seafarers operating these ships from all over the world . Without the seafarers who operate these ships, global trade as we know it, and the world economy with it, would collapse.

Despite the centrality of shipping in our contemporary lives, consumers know little about the industry and its movements of goods around the globe. We know even less about the people who move these goods, the conditions under which they work and live at sea and what led them to become seafarers. During fieldwork, seafarers shared not only their perceptions of contemporary maritime piracy, but they also provided a dense narrative that expands upon seafaring lives more broadly. Because of the global pervasiveness of the industry, these narratives offer not only a portrayal of what some might see as a niche profession, but of the dynamics of global capitalism. The global maritime industry as a field of study offers a radically different, fascinating and important view of what these themes might mean in practice.

Piracy was my initial focus, but as fieldwork progressed, it became clear that seafarers were not particularly preoccupied with piracy. Instead, economic security emerged as a central theme among many of my seafaring informants. It became clear to me that privileging piracy as an extreme and sensational work condition, as it had been presented in some of the media, offered a specific perception of piracy that was not mirrored among most of my seafaring informants. Contrary to these perceptions, I argue that because the global maritime supply chain is predicated on differences in order to generate profit, maritime piracy unfolds as a multidimensional phenomenon, in which the risks it implies, offers opportunities for economic and existential losses, but also gains, for both seafarers and shipowners.

In addition to this structural argument, I demonstrate how these multidimensional risks are embedded in individual itineraries, where maritime piracy was simply one piece in a larger puzzle that has been informed by the inner workings of a global industry. Considering this perspective, I do not focus on contemporary maritime piracy as an extraordinary work condition with which seafarers must contend. Instead, this dissertation is an analysis of seafarers’ entangled and unequal positions within the maritime global supply chain. Contemporary maritime piracy emerges as a case through which we may understand how seafarers grasp economic opportunities for existential security as they open and close along globally connected itineraries.

PhD dissertation by Adrienne Mannov: Economies of Security; Department of Anthropology at University of Copenhagen; 2015