Dept as an Urban Chronotope in Mongolia 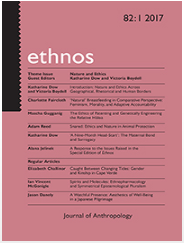 In the article "Debt as an Urban Chronotope in Mongolia" professor Morten Axel Pedersen argues, that debt has acquired a gift-like nature in Ulaandbaatar, Mongolia, and shows how the temporality of such ‘generalized debt’ is inseparable from the neo-liberal deregulation of residential spaces in Ulaandbaatar and other postsocialist cities.

Looking back, relations of debt were during socialism mostly restricted to closed circuits of friends, whose exchange of objects and favours often stretched over a long time. With the transition to capitalism in the 1990s, both the number of debt obligations and the size of loans expanded dramatically, without being subject to similar curtailment or other formalization. The result is that ‘no one pays back what they owe’, as people complain.

Departing from the seemingly peculiar fact that people nonetheless keep on lending others money – including debtors they hardly know or with bad reputation – Morten Axel Pedersen argues that debt is comparable with gifts and the reason lies within the transition to capitalism after the Democratic Revolution in Mongolia and the breakdown of the Soviet Union in the beginning of the 1990s.