This book, edited by Professor Oscar Salemink, contains nine contributions at the intersection of scholarship, activism, and sociocultural politics in mainland Southeast Asia, inspired by the remarkable career of Achan Chayan Vaddhanaphuti, an academic who has worked tirelessly in Thailand and beyond to foster critical socialscience scholarship that engages with marginalized communities. 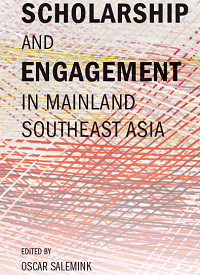 The research in this volume is both highly personal and academically rigorous, born out of the authors’ experiences studying and working with communities and individuals who are too easily pushed to the margins of mainstream politics and culture. This willingness to support such underprivileged groups through meticulous scholarship is a hallmark of the engaged scholarly activism Achan Chayan has spent a lifetime encouraging. The volume also contains a biographical sketch of Chayan as scholar and activist, and an afterword by Michael Herzfeld.

“This volume demonstrates convincingly that, rather than compromising or trading off against one another, engagement and intellectual endeavor can be mutually reinforcing. The quality and breadth of the contributions in this book reflect and build on the totality of Achan Chayan’s work as one of Southeast Asia’s most engaged scholars.”—Philip Hirsch,
University of Sydney

“This wide-ranging collection is a fitting tribute to a legendary Thai scholar whose energy
and engaged vision have inspired so many academics and community advocates to pursue
committed scholarship on Southeast Asia.”—Philip Taylor, Australian National University