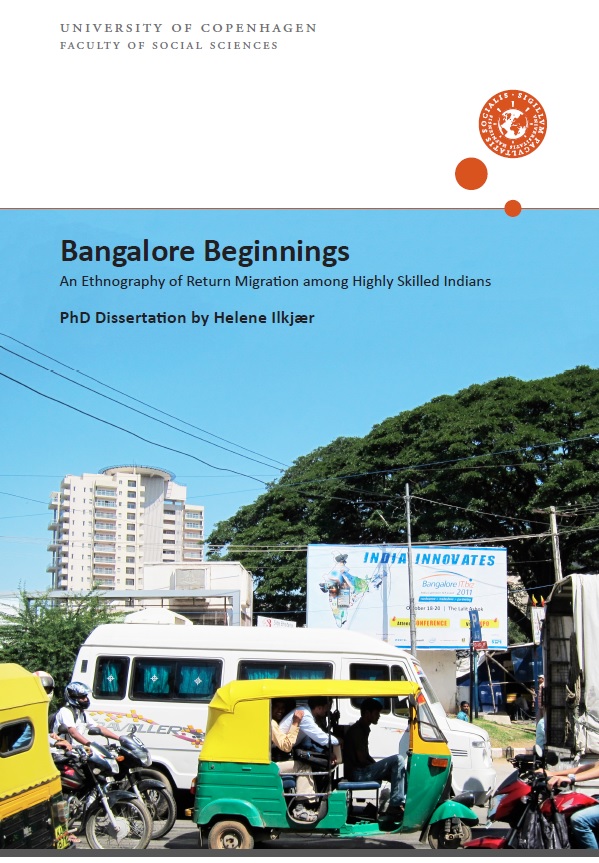 This dissertation investigates return migration among highly skilled Indian IT, science and technology professionals to the city of Bangalore, a movement that has popularly been dubbed as “reverse brain drain” to “India’s Silicon Valley.”

Taking its point of departure in the everyday lived experiences and practices of returnees outside their workplaces, the dissertation examines the post-return dualities of a new/old place and familiar/unfamiliar social spaces.

While other researchers have pointed to returnees experiencing the newness – the changes and developments to their home country – as the unfamiliar parts when they come back, this dissertation points in the opposite direction. I argue that it is, in fact, the spaces of the so-called ”new” India including

that proved to be the most familiar settings and the easiest spaces for the returnees to relate to.

Furthermore, I show that it was precisely the buzz about a “new” India coming into being, and its related promises of development and future prospects, that helped draw the returnees back in large numbers.

Rather than just a nostalgia-fueled return to the past, I thus suggest that the returnees’ moves to Bangalore should be understood as forward movements towards opportunities and change. In other words, by going back to India the returnees were in fact directing themselves towards the future.

Yet, I also show that the returnees’ turn towards the “new” India nevertheless incorporated select elements of the values and lifestyles associated with the “old” India, especially in relation to inter-generational family ties and in commitments to giving back.

While the dissertation shows the particularities of the return migration – the motivations, hopes and challenges – I also suggest that the analysis of this movement benefits from considering the return as only one node within a longer, and likely ongoing, series of migrations. I thus argue that the returnees’ migrations back to India are open-ended movements containing the potentiality for further moves, and hence they constitute a return, rather than, as has been traditionally been assumed, the final return.

Helene Ilkjær: "Bangalore Beginnings - An Ethnography of Return Migration among Highly Skilled Indians"; Ph.d. dissertation from the Department of Anthropology; 2015