Becoming a warring nation: adjusting to war and violence in Denmark 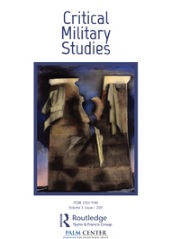 The research project ‘Soldier and Society: Anthropological Perspectives’ has written a special issue of the Journal Critical Military Studies; Becoming a warring nation: adjusting to war and violence in Denmark . The issue focuses on contemporary developments in Denmark in the wake of the country’s involvement in the ‘coalition’ wars of recent decades. During this period the Danish Government has changed its foreign policy from being defined by pacifism and strong tradition of non-involvement to a so-called ‘activist’ foreign policy.

The four articles attempt to outline the road from ‘adaptation’ to ‘activism’, arguing for the need of a critical, qualitatively based research focus on the social and cultural repercussions of this peculiar ‘military moment’ in Denmark. Building on ethnographic case studies the special issue seeks to contribute to such a wider discussion and lead the way for more research alike.

The four articles are:

What if war is not simply a destructive force? What if war might also offer possibilities of regeneration? What if war harbours potential for self-becoming, for realizing one’s dreams, and for fulfilling one’s desires? The inquiry at hand suggests that Danish warriorhood has been revived with Denmark’s military engagements in Iraq and Afghanistan. Addressing this fundamental transformation of the Danish soldier’s operational role and social identity, this article argues that there are Danish troops who seek out war in Afghanistan as an existential window of opportunity for following their desires to become ‘true warriors’ and thereby regenerate themselves as ‘authentic individuals’. Based on ethnographic fieldwork with some of the very last Danish combat soldiers deployed with the International Security Assistance Force (ISAF), this study explores ethnographically how these Danish ISAF troops give voice to and act upon their warrior dreams over time – before, during, and after a tour of duty in the Afghan Helmand Province. The article shows that there are Danish soldiers who become disillusioned by war – not because of any barbarity, but because of the virtual absence of any real acts of combat. As such, the inquiry bears witness, on the one hand, to how some Danish soldiers have their warrior dreams shattered by what turned out in their case to be a relatively uneventful war and, on the other hand, to how a few of these troops attempt to mend their broken warrior dreams by returning to war for a second chance.

This article takes a point of departure in Denmark’s decision to use the armed forces as a tool of foreign policy, even when this implies deployment to regions where combat and casualties must be expected. Since war, combat, and violence contradict traditional self-understandings of being Danish, recent experiences in Iraq, Afghanistan, and elsewhere have implied renegotiations and reconstructions of the national ‘we’. In this article, I examine how this is reflected in the emergent memorial landscape by focusing on one national monument, two grassroots memorials, and 20 individual tombstones. All memorials, I argue, relate to a recent public discourse about the ‘war-fighting nation’ and the ‘warrior generation’. The national monument eschews references to war and violence to produce a national narrative focusing on ‘effort’ as the core collective value. One grassroots memorial subtly challenges war and insists on possible alternatives. The other silently accepts war, but demonstrates that, apart from the ‘fallen soldiers’ who are commonly memorialized, war produces many other kinds of suffering that remain officially and socially unrecognized. The individual graves and tombstones, which have been designed by the soldiers and their families, memorialize soldiers as professionals with a military belonging as well as persons with numerous social attachments. And they most directly address the war, violence, and suffering that the emergence of a ‘war-fighting nation’ and a ‘warrior generation’ inevitably implies. Assembling different kinds of memorials that represent different positions of authority and power in the same analysis, I argue, provides a unique insight into how Denmark’s recent military adventures are ascribed meaning, contested, and negotiated.

This paper discusses the crafting of trustworthy knowledge about war as tensioned between ideals of distance and proximity. I draw on field material assembled at the Danish Arsenal Museum in Copenhagen over the spring and summer of 2013. In an exhibition entitled The Distant War, set up in close cooperation with the Danish armed forces and with actual involvement of Afghanistan veterans, the museum immersed visitors in a three-dimensional, hands-on experience of ‘being there’ in the midst of the on-going conflict in the troubled Helmand Province, the main area of the Danish military engagement. This ‘approximated Afghanistan’ clearly appealed to visitors and involved them in ways that more conventional exhibitions often fail to do. At the same time, it relied on certain and, I argue, reconfigured renderings of authority, sidelining or even actively hiding academic (‘distanced’) expertise, instead relying on the first-hand accounts and experiences of the war witnesses themselves. Its gripping cinematic communication styles served to underpin particular knowledges and specific kinds of expertise that depend on getting ‘as close’ as possible to the ‘distant war’. The article contextualizes and scrutinizes the crafting of war knowledge in Copenhagen, including its experiential foundation. I argue that in the celebration of (particular forms of) proximity, cultural mediations such as this one may also serve to install new distances and cement a number of existing ones.

The article explores how military deployment affects the everyday lives of Danish soldiers’ families. By approaching the challenges faced by soldiers and their partners from an anthropological perspective of the family, the article provides new insights into the social consequences of military deployment and the processes of militarization at home. Drawing on ethnographic examples from recent fieldwork among women, children, and soldiers at different stages of deployment, the article demonstrates how soldiers and their families attempt to live up to ideals about parenthood and family by creating ‘relational spaces’ that allow them to preserve intimate relationships despite geographical distances. Besides dealing with the practical responsibilities of everyday life, soldiers’ partners also fight to maintain the sense of closeness associated with normative ideals about family relations and a ‘good’ family life. The emergence of relational spaces enables soldiers and their families to take part in each other’s everyday lives. However, when the lives of soldiers abroad and family members at home become entangled, these relational spaces also result in the normalization and legitimization of the military as a present and interfering figure in the lives of soldiers’ families.